Although Watooka Guest House has resumed full operation, a number of persons are still reflecting on its rehabilitation journey. In fact many are still commending the mastermind behind this auspicious achievement. 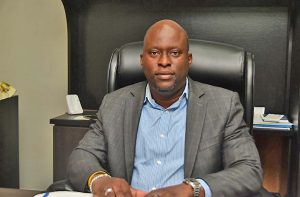 Acting Chief Executive Officer [CEO] of the National Industrial and Commercial and Investments Limited [NICIL), Colvin Heath-London, has been credited with facilitating the major refurbishment of the landmark facility.
Recognising this recently was Agriculture Minister with responsibility for Rural Affairs, Mrs. Valerie Patterson-Yearwood, who has dubbed Heath-London’s efforts as “extraordinary”. According to Minister Patterson-Yearwood, his contributions have been very significant especially in light of the fact that he isn’t even from Linden.
Moreover, the Minister said that she is heartened to see what the facility has been transformed into given its former dilapidated state. She recalled that the facility was plagued with a myriad of issues ahead of its rehabilitation ranging from faulty and leaking air conditioners to malfunctioning toilets.
According to the Minister, she had personally experienced the shortcomings of the facility. “The flushing of the toilet would cause it to make noise for about five minutes and there were a number of other things that were missing from rooms,” the Minister divulged.
But these are all issues of the past, she noted with pride.
Describing Heath-London as “a man having a great heart”, the Minister said that the people of Region Ten should be excited that he demonstrated his commitment to a task that has surpassed expectations.
“To what this facility used to be, I can say that this man certainly had great plans. He has truly demonstrated his vision and the plans of his heart so we should continue to congratulate him for the giant steps that he took,” Patterson-Yearwood said.
Quoting the late motivational speaker and author, Dr. Miles Munroe’s maxim that “vision is of the eyes and not the heart,” the Minister said of Heath-London that he is an individual of true vision.
According to her, while there was some talk about no money being available for the refurbishment, Heath-London was able to do what was necessary to find the necessary finances.
“What we see now, it is certainly beyond expectation and for those who knew what this [Watooka Guest House] used to be, it certainly took vision to bring it to where it is today. I am very proud that he has bigger and greater plans as I can feel his heart and I would like to express, on behalf of the residents of Region 10, a big thank you to him,” said Patterson-Yearwood.
In her speech of commendation to the NICIL executive, she added, “There are some people who have eyes and can’t see and there are some who would say what must be done but wouldn’t do it, but you have eyes, you saw and you did.”
The Region’s Regional Chairman, Mr. Renis Morian, also shared his appreciation for the support, which he said, is the epitome of leadership, a trait that is sometimes missing in society. According to Morian, the level of leadership Heath-London has brought to Linden through NICIL, the public can expect greater things.
“I am personally, and on behalf of the residents of Region Ten, very proud and would like to continue expressing our appreciation to NICIL as its evident that with Heath-London’s vision, we will continue to see greater things from NICIL,” Morian confidently predicted.