After some three hours of intense competition and sizzling entertainment last Saturday it was 19-year-old Atasha Pantlitz who walked away with the inaugural crown of the 2019 Miss Skeldon Heritage Resort pageant. The pageant, which was held at the Skeldon Heritage Resort, saw a large turnout of people who came to witness eight ladies vie for the crown. 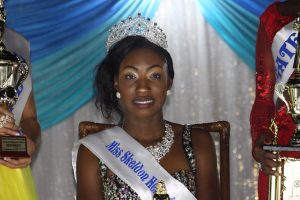 Although the pageant got off to a late start due to technical reasons, patrons were entertained and treated to a high standard of pageantry by the young ladies who ranged between the ages of 14 and 23 years old. The eight contestants showcased their stuff as they all competed fiercely in an effort to have the distinction of winning the crown for the first time.
Director General of the Guyana Tourism Authority (GTA), Donald Sinclair, said that he first learnt of the pageant via the media and immediately contacted the organisers. Sinclair commended the organisers for being creative, innovative and having a timely pageant. He stressed that his organisation was pleased to be associated with it and said that come 2020, GTA will be a major sponsor. He said that GTA will be working with the resort in expanding and further growing the pageant.
“After reading about this pageant, I said that I must be there and I brought some persons to view the pageant so that come next year we can be better able to assist the organisers. I believe that such a pageant can really grow and we at the Authority would allow the winner to be the face and voice for us in this part of the cou 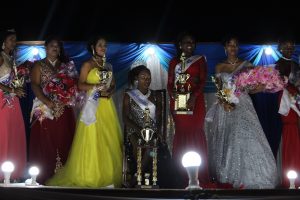 The Queen flanked by other runners-up and delegates

ntry. Certainly this pageant can grow whereby it produces tourism ambassadors for Region Six; young ladies who are not only physically beautiful but young ladies who can represent their region, their village and say good things about where they grow up,” Sinclair said.
The Director General added, “I am sure persons can tell a friend, overseas relatives, any one about this very special place called the Skeldon Heritage Resort where they can spend some time and learn something about the heritage of sugar and the traditions in this part of Guyana.”
The event was hosted by popular personality Linden Murray who coordinated the pageant, and Heart of Heart Founder and 2020 Miss Guyana World Delegate, Jamacia Mc Almount.
Those, who competed with Pantlitz for the crown in the segments of Intelligence, Talent, Resort Wear and Evening wear were: Natoya Rawlins, 19; Ishieka Nowrang, 18; Latisha Boyce, 18; Lalita Laljit, 14; Felicia Reece, 16; Renee France, 15, and India Laljita, 15.
The ladies all gave a good account of themselves in the respective categories and a number of supporters made their backing quite evident. However, it was only Rawlins, Pantlitz, Reece and France who made it into the final round.
While a few fumbled with their answer to the final question (What three things would they do to market the Skeldon Heritage Resort?), Pantlitz’s response was very pleasing to the audience which erupted in screams of excitement. Rawlins supporters also went into a frenzy when she gave her response.
It was clear the judges had their work cut out for them. But it came as no surprise that it was just one point that separated the queen and her first runner-up. Many patrons expressed satisfaction with the results and urged the organisers to ensure that such high standard of pageantry remains a constant feature.
For being crowned queen, Pantlitz secured a cash prize of $200,000, a weekend for two at the Watooka Guest House, a gift basket, one year free entry to activities and events taking place at the resort along with one year marketing contract with the resort, where she will be their spokesperson and facial image. The first runner-up, Rawlins, took home $100,000 while the second runner-up, France, walked away with $75,000, and the third runner-up, Reece, got $50,000. The runners-up also each received a gift basket, one year free entry to activities and events taking place at the resort, a weekend stay for two at the Berbice Inn Hotel, among other prizes. The best talent award was won by the first runner up, while the queen won the best evening gown award. Additionally, all the contestants each received a gift basket compliment of Ansa Mc Al Limited. The competition was sponsored by the National Industrial and Commercial Investments Limited (NICIL) and Ansa Mc Al.