Coordinator of the inaugural Miss Skeldon Heritage Resort Pageant, Linden Murray, says that the pageant will highlight a number of social ills facing youths in the community. 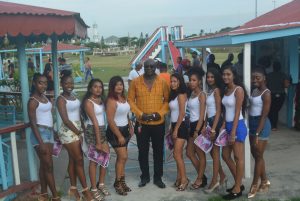 He said that with the pageant billed for October 5, 2019 he is anticipating that those taking part in the pageant will be able to further advance and enhance themselves through the experience gained.
Murray who is well known on the Corentyne for his significant contributions in community and voluntarism services, said that the pageant will seek to highlight some of the ills that are facing youths with the aim of bringing needed attention to them.
“I am very grateful that through NICIL/SPU, I am getting an opportunity to make this pageant a reality so that collectively, we can have some of the challenges and difficulties being faced within the community, addressed.
“There is an urgent need to have these addressed so that the youths primarily can be assisted,” he said.
The former GUYSUCO’s Community Development/ Industrial Welfare Officer said that the pageant is not the typical pageant as it seeks to highlight the talent and skills of the young ladies. He said that it would be a launching path for a number of opportunities for many of the girls.
“In determining what I can do to help in further enhancing the community, after I was asked to manage the resort, there were several ideas and after discussion with several persons from the community. I decided that having a pageant would be ideal as together with the resort, we would be able to bring attention to several issues affecting young people, especially our young girls. “Several of our young people are at home doing nothing, while some are starving for opportunities and activities to engage them positively, therefore this pageant will serve to provide that,” he said.
He admitted that the community relish on competition among themselves, as such he anticipates a very high level of competition among the ladies with at least five having pageant experience. He stressed that they are anticipating about 1500 persons turning out.
He disclosed that the resort has approached businesses within the community as they wanted it to be a completely community oriented affair, but admitted that sponsorship has not been as favourable as they had anticipated.
He revealed that some businesses initially had given their word to support financially but as the pageant approaches, some have pulled out citing various reasons.
“Several businesses have told us that economically, things are very difficult, but I recognise that with the election spirit around many businesses are holding back; however, I am very grateful to our parent company NICIL/SPU and Ansa McCal who are two major companies that have stepped up to the plate.
“There are other businesses from the community that have come forward to help but we are still seeking additional sponsorship so as to ensure that the pageant is one that can be considered very successful,” Murray stressed.
The Resort Manager however firmly feels that the number of persons who turns out to the resort especially on Sundays has helped in making the resort a first choice for many who seek to relax especially with their family.
He reiterated his view that the pageant is going to come off very well, stating that the excitement among the community is very high. He said that the support from the community to the services offered at the resort is heartening.
He noted that they have on average some 500 persons who would relax and lime at the resort on Sundays. He revealed that since the closure of the estate the community have gravitated to the resort in a very positive way as they recognise that the community doesn’t have many clean entertainment venues that caters primarily for families.
“As such, they are eager to continue enhancing the services that we provide here, which includes the swimming pool, pools table, accommodation in terms of rooms and apartments among others,” he said
He said that while other pageants held in the community were deemed mediocre, with NICIL/SPU being the primary organisers they are not leaving any stone unturned in ensuring that the standard and level of the pageant is of the highest level.
“In previous pageants held in the community, the primary objective of organisers was just to make money; however we at NICIL/SPU have a different agenda as we are seeking to build community capacity, while providing needed entertainment and opportunities to many.
“As such, the pageant is not geared at financial gains as the benefits that we seek would be long term as we seek to further enhance the community,” he opined.
“The monies made from this pageant are not going into the pockets of any person. Rather it would be used in enhancing and further developing this resort so that it can be a tourist attraction for many.
Residents in the community can access it for whatever activities and events that they are holding.”