Watooka House on Thursday reopened its doors to the public after several months of extensive rehabilitation and upgrades costing some $50 million.

According to a Department of Public Information (DPI) report, the Watooka Complex, which has been in existence since the commencement of bauxite mining in Linden, is located in the small community of Watooka, on the Mackenzie shore of the Demerara River.

Today, the complex is a renowned tourist hotspot in the mining town and has hosted dignitaries from all over the world.

The colonial-style complex boasts a guest house, a newly refurbished swimming pool, manicured lawns, a basketball court, a tennis court and a new deck overseeing the Demerara River. Also included in the upgrades was an overhaul of the establishment’s suites and kitchen, extension of the restaurant and the installation of a Wi-Fi system.

As the minister responsible for the tourism industry in Guyana, Rajkumar mentioned some of the history that surrounds the landmark complex. The guest house was built in the 1940s and served as a club for the expatriates who were employed with the Demerara Bauxite Company and the colonial building was later transformed into a guest house.

The Business Minister also noted the Watooka House’s capacity for growth and tourism and the pivotal role the newly refurbished complex will play in Linden’s development.

Mayor Arindell, in her remarks, said that the township of Linden was grateful for the upgrades the complex has seen as it will help to transform Linden. “Linden is now in the right place [to see] magnificent changes being made.” She added that Watooka House is an integral part of Linden history and its story must be told.

Watooka House hosts guest, birthdays, weddings, parties and is a famous recreational spot for both Lindeners and out-of-region visitors, the report added. 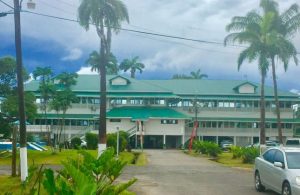 The Watooka Complex Guest House, Linden, Region 10 (Upper Demerara-Berbice), was officially re-commissioned on Thursday following a $50 million rehabilitation. The historic landmark was declared open by Business Minister, Haimraj Rajkumar at a simple ceremony attended by Government and regional officials. The building, which was constructed in the early 20th century, recently underwent massive rehabilitation by the National Industrial and Commercial Investments Limited (NICIL). It now features a contemporary deck overlooking the Watooka section of the Demerara River amongst numerous other enhanced amenities.

Minister Rajkumar congratulated all involved in the rehabilitation process, as he expressed admiration for the newly constructed deck, which he said has lifted the ambience of the facility. He also charged the management of the facility to ensure that the unique experience, impressive architecture and pristine surroundings are preserved. The Minister believes that Watooka Guest House can be more than an accommodating establishment. “You can offer visitors a complete experience because it is located on one of the most beautiful spots on the Demerara River which can lend itself to a raft of activities such as kayaking, fishing, river tours, bird watching and many more…”, the Minister said. He further pledged to provide assistance to the project and congratulated the stakeholders involved in fostering tourism development.

Minister with responsibility for Housing, Annette Ferguson noted the importance of the preservation of historical buildings, which she said is crucial to the nation’s heritage and history. “The continued existence of Watooka Guest House is indeed an historical one and it has deep symbolism…We must be consistently reminded about the importance of maintaining buildings and sites of national interest and their significance or symbolism, their authenticity and history are retained. There is increased economic value through tourism and they provide tangible examples of knowledge and history that can be grasped by successive generations”, she noted.

NICIL CEO, Colvin Heath London explained that the team embarked on the rehabilitation since it views Linden as a destination location. He outlined plans to have the community “booming again” since it was during the early days of bauxite mining that the guest house was constructed.

Linden Mayor Waneka Arrindell in her remarks said it was a privilege to see the historical transformation as she urged NICIL to continue to work with the municipality in an effort to transform, revive and preserve the community’s heritage.
Meanwhile, Regional Chairman Renis Morian pointed to the history and evolution of the guest house as he congratulated and commended the management and team of NICIL in making the project a successful one.
In addition, the public was encouraged to visit the guest house and have a “taste of the Watooka experience”. (Another view of the upgraded Watooka Guest House)

ONE of the oldest guest houses and restaurants in Linden has received a complete overhaul and transformation under the stewardship of the National Industrial and Commercial Investments Limited (NICIL).

The upgrades to the facility were done to the tune of $50M and include massive refurbishments to 13 suites, including the Presidential and Prime Ministerial Suites, purchasing of modern equipment, appliances and other amenities, expansion of sections of the restaurant, such as the bar; installations of air-conditioning units, lights, WIFI system and cable TV, a complete kitchen make over, landscaping and general maintenance of the lawns, among other things.

Given the fact that the Watooka Guest House is over seven decades old, and the emergence of competition in the hospitality industry in Linden, NICIL officials related that the upgrades were more than timely. The entire compound of the Watooka Guest house, which also boasts a pool, a decorative lawn and garden, has been extensively improved. The roof, windows, pool, fence and gate among other things were also modernised.

NEW ADDITIONS
In addition to the upgrades to the current facilities, the project also included the addition of other attractions, the most catered for, is the construction of a deck and board walk overlooking the tranquility and calmness of the Demerara River, which runs directly behind the Watooka Guest house. The deck is the first of its kind in Linden and will positively contribute to the much talked about aqua-tourism industry. It will accommodate an outdoor restaurant and bar. In a few weeks, guests can enjoy the calm and picturesque scenery of Linden, inhale the clean Watooka air, enjoy the natural sounds of the waves of the Demerara River dance with the cool evening breeze as the chirps of local birds accessorise the flora of the environment and add to the beat of nature’s song. A wide choice of local cuisine is expected to be available at the restaurant, in addition to cocktails and other western culinary attractions.

In addition to the new deck, other added amenities that were part of the upgrade, include a fully furnished annex that comes with all modern amenities.

This is located opposite to the Watooka Guest House. In an effort to boost its hospitality service, a plethora of new services are also now available. These include collaborating with tour agencies to ensure guests enjoy a full experience of Linden, a private lounge, a membership scheme, security escorts and transportation services as well as catering for private, small and large events, among other things

HISTORY OF THE WATOOKA GUEST HOUSE
The Watooka Complex was built in the 1940s during the era of early bauxite production and formerly served as the Watooka Club for expatriates who worked at the Demerara Bauxite Company (DEMBA). It is one of the oldest colonial buildings in South Mackenzie, which at that time was home to the upper echelons of the mining town. An apartheid system was in place at the time and locals were not allowed at the club or nowhere close to South Mackenzie.

As time progressed, the club was transformed into a guest house, to accommodate mainly overseas guests. Some of the popular names hosted by the Watooka Guest House hosted were Her Majesty Queen Elizabeth II in 1966; His Royal Highness, Prince Philip, Duke of Edinburg in 1962 and 1968; His Royal Highness, Prince Charles; Princess Margaret, the Countess of Snowdon; President Fidel Castro of Cuba; King Moshoeshoe II of Lesotho, an African nation in 1987; Her Royal Highness, Princess Alice of England; and President Samora Moises Machel of Mozambique, among others. Some of the Guyanese leaders that were hosted included Sir David Rose and Lady Rose, Governor General; Hon. Dr. Cheddi Jagan; Hon. Arthur Chung; Hon.

Linden Forbes Sampson Burnham and Hon. Janet Jagan.
The three-storey wooden edifice features an antique colonial design and is nestled between lush vegetation and the Demerara River. Its outdoor flora includes palm trees that were planted by H.R.H. Princess Alice, the Countess of Athlone and the Earl of Athlone during her visit to Watooka Complex between March 19 to the 21, 1950. These complement other indigenous plants that add to the authenticity, beauty and exotic atmosphere of its surroundings, which have been the pride and joy of not only Watooka but Linden. It is nothing short of a fusion of natural iridescent colours of birds and flowers with a tranquil atmosphere.

Opposite to the Watooka Guest House is a centennial park which sports the old railway line station with locomotives as walking draglines that were used in the earlier days of bauxite mining.
The Watooka Guest House is no doubt one of the best hospitality destinations in Linden as it represents the warmth of the people, the richness of the history and the diversity of cultures.